Sydney is truly one of the most stunning cities in the world. It is a universe of small islands, coves, beaches, hills, inlets, capes, rivers, and estuaries. It is a vast territory of 12,367 square kilometres that includes the world’s largest natural harbour, and to the west the gum-tree-scented Blue Mountains. Greater London by comparison is only 1,569 square kilometres making Sydney metropolitan area nearly eight times bigger than the British capital. It takes therefore time to navigate and explore the city. The main roads whilst connecting the different neighbourhoods at a regional scale, fail to bring people together at a local scale, they are most of the times large unshaded pedestrian and cycle unfriendly busy roads deprived of activities. Even the iconic Sydney Harbour Bridge one of the most known tourist attractions of the city and the principal pedestrian connector between the south and north shore despite its generous 49 metres of width leaves less than 2 metres to the pedestrian realm failing therefore to really acquire the status of a public space and remaining fundamentally a transport infrastructure.

At another scale and at another tempo Sydney can be explored by ferries, by following the infinite pattern of the beautifully shaded neighbourhood streets, and by using the many walks that the city offers. When we type in Google “Sydney” + “walks” we get 42,500,000 entries when we type “London” + “walks” we get 7,500,000 results. Walking in Sydney is a serious business, on the top of the walking list there are the coastal walks which offer 350 km of uninterrupted peripatetic delight. The walks follow the coastline providing spaces to connect to the geography of the place and to your inner self. These are places of socialization, common grounds to celebrate not only outdoor life but also city life. Along the coastal walks we can find playgrounds, outdoor kitchens, tables, benches, and the astonishing rock pools.

Sydney rock pools are minimal interventions designed by mastering the dialogue between the hammering out of rocks and the building in of minimal concrete walls, together they create a special connection with us and the big blue.

It is a dynamic ever changing liaison that depends on the level of tide, on the wind speed, and the weather. Sometimes one feels totally immersed in the ocean sometimes one feels at a reassuring distance from it. The rock pools of Sydney are not only places for swimming but magical architectonical interventions that allow us to feel the relationship with the ocean.

The following images are taken during my coastal walk from Manly Beach to North Narrabeen. It is also important to note that most of the pools were built after the 1930 in what became known as post depression pool building when the Unemployment Relief Fund was established and a series of public works was initiated. It is wonderful to think that in those days so much investment was spent in the amelioration of life of all individuals and not by imposing austerity measures towards those people most in need.

This is a 50 metre pool built in 1937 at the north end of Manly Beach. The pool is much higher than the adjacent beach so there is a great view whilst swimming. It it a sturdy pool, a concrete box with one side on the beach and the other against the cliff.

This is a 50 metre pool also built after 1930. It is not as high as Queenscliff and therefore it feels more integrated with the surrounding landscape, and the relationship with the ocean more intimate. The view from this pool is amazing.

This is a 50 metre pool originally built in 1920. It is a far less invasive construction than Queenscliff and Freshwater pool as the amount of concrete poured is considerable inferior. The pool is defined by a double wall directly built upon the rocks, the walls bend twice at an angle lower than 90 before touching the cliff, this gesture give the pool a sculptural feeling, like a fountain. It is a great beautiful place.

This is a 32×20 pool built in 1957. Already this unusual dimension gives a completely different feeling to the pool: as a place of meditation and enjoyment rather than swimming. It is one of the most spectacular and delicate pools I have ever seen in my life. It is essentially a concrete wall defining an inner microcosm which includes its own island: a solitary rock. The wall is low just higher than the sea level, and during high tides or storms the pool becomes basically one with the ocean. The pool is also built in close proximity to the cliff and therefore when swimming the rocks are literally next to you. 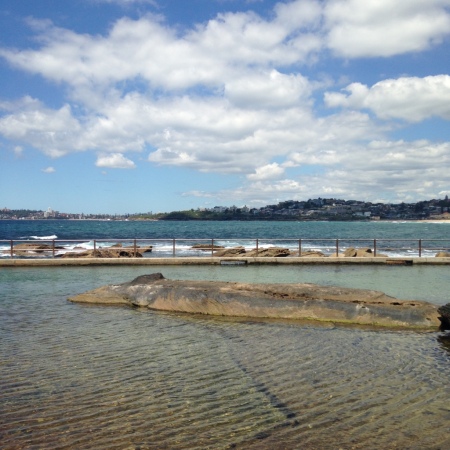 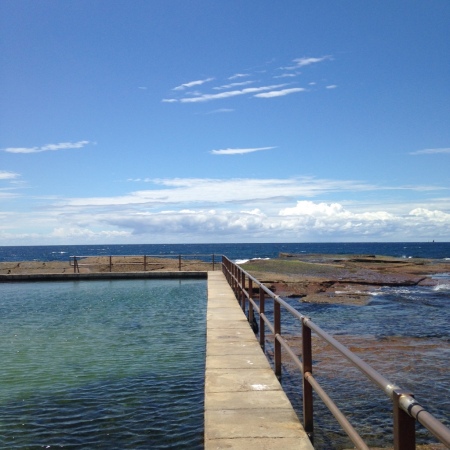 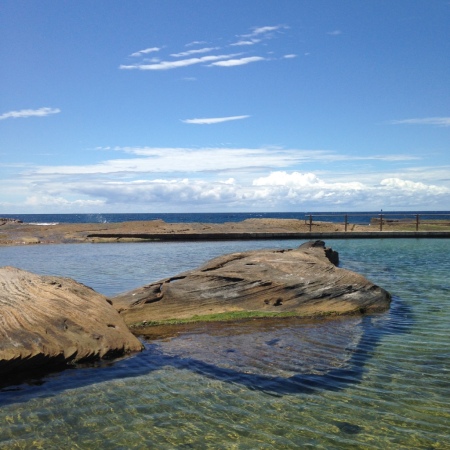 This is a 50 metre pool built in 1919. What I find most spectacular about this pool is the sandstone rock that defines one of its sides. What a beautiful architecture it is. 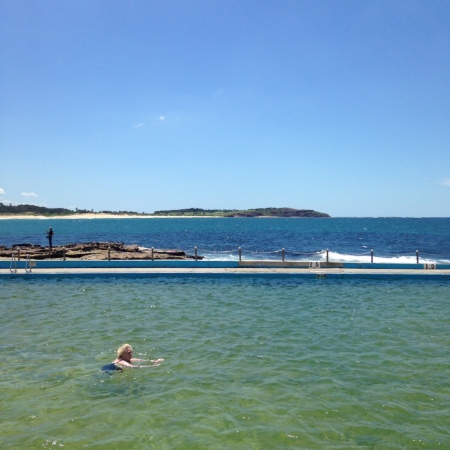 This is a beautifully irregular shape pool opened in 1926. There are great view from the pool and truly one has the feeling to swim in the ocean. Wonderful experience. 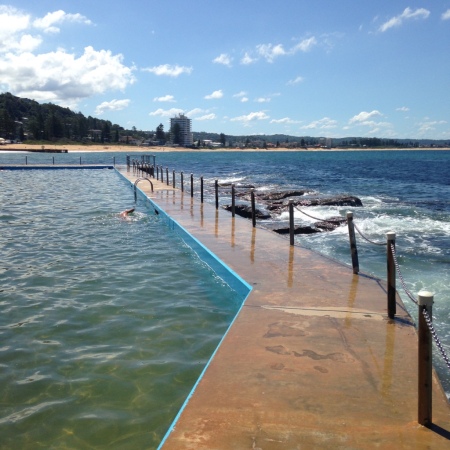 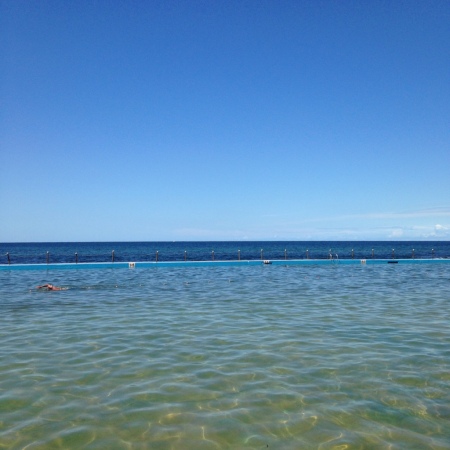 Of all the pools of my walk this is the one that truly stunned me. It is an absolute delight to swim in this pool or simply be in it. It is a minimal intervention that skilfully is able to capture the very essence of the ocean with few architectonical elements: a boardwalk, a concrete wall, and a ramp. Simply divine. 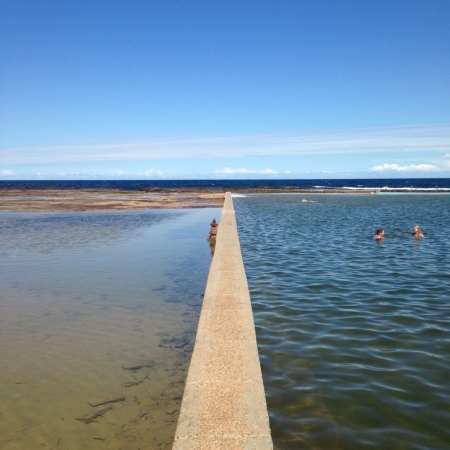 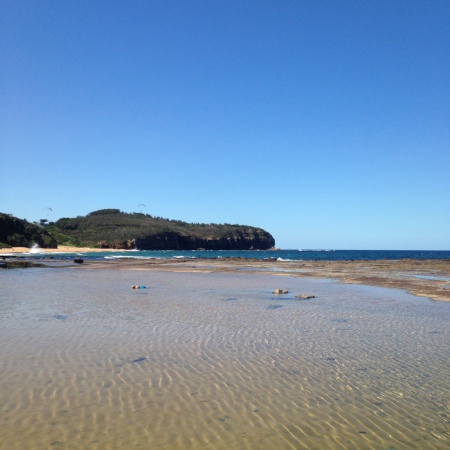 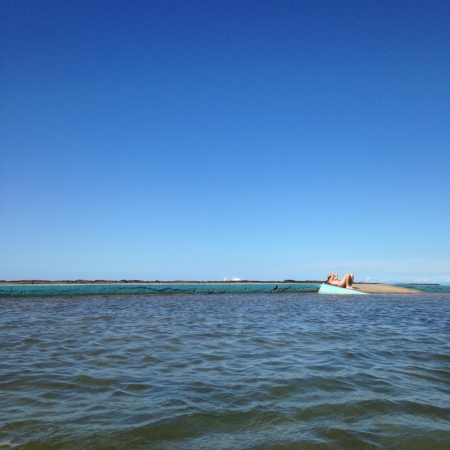